The City of Vancouver has released its draft budget for 2017, which includes property and service fee increases to cover a nearly 50 per cent increase in its capital budget.

The City of Vancouver is proposing to raise property taxes and services fees to cover a $55-million increase in its operating budget.

The $1.32-billion draft 2017 budget was released late Wednesday afternoon. It includes a 3.4 per cent property tax increase and other increases for utility, recreation and permit fees.

The city says the increases will go towards greater costs for existing services that are in line with inflation and new expenditures in other areas like social housing, security and the arts.

According to the city, the property and utility fee increases will amount to an extra $49 in costs for a median homeowner in Vancouver. 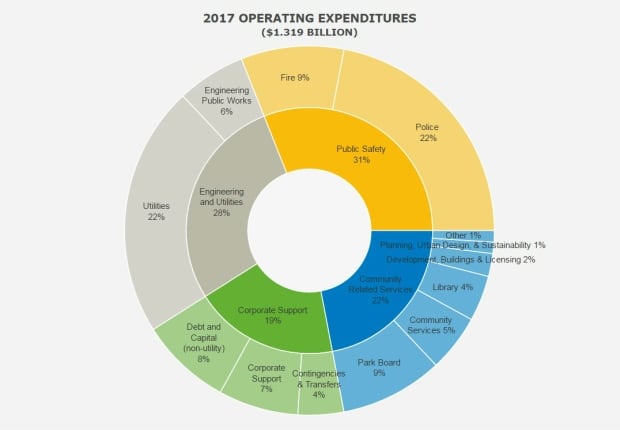 But opposing Coun. George Affleck says the rate increases shouldn’t outpace inflation, which is currently at under two per cent.

Afflect says in the past 10 years the city budget has increased by $300 million or by 30 per cent, but the population has only increased by nine per cent.

According to the city, Vancouver has had one of the lowest average property tax increases in the Lower Mainland.

The budget says the city expects to take in an extra $32.3 million in property tax revenues and an additional $16.8 million in service fee income in 2017.

The City of Vancouver did not respond to requests for comment.